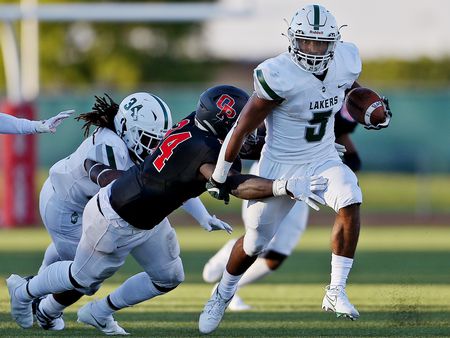 One of the state’s top 2022 high school football recruits has already narrowed his list of preferred future programs to 10, with Michigan and Michigan State making the cut.

Tatum (5-10, 185) was listed as a running back for most of his high school career, but recently started getting listed as an athlete due to his continued development as a defensive back. The 247Sports composite and the Rivals ratings each list Tatum as a four-star athlete. ESPN lists him as a four-star running back. He currently has over 30 offers.

The 247Sports composite lists Tatm the 246th overall player in the nation’s 2022 class and the No. 12 athlete in the country. He is also listed as the state’s No. 5 overall recruit.

Still in the midst of his junior year for the 8-1 Lakers, Tatum has 2 interceptions, 2 sacks, 4 tackles for a loss, 5 pass deflections and 33 tackles. On offense, he split time with Edwards at running back and has 425 rushing yards and 4 touchdowns. He also has 127 yards receiving while averaging 25 yards per kick return.

“I think I’m an athlete,” Tatum told MLive back in May. “I think I can do anything the coach wants me to do. I’m just very competitive and I’m a leader at the same time. I just take that to heart, like when some someone says they’re faster than me, it’s a goal for me to beat them. I’m just really competitive and I have a lot of pride for it.”