Apple alongside the Apple Watch Series 6 unveiled Apple Fitness+, a new service that’s designed to help Apple Watch owners keep fit through a series of guided workouts that are available across multiple workout categories. Our Apple Fitness+ guide covers everything that we know about the Fitness+ service, which launched on December 14.

Apple Fitness+ is an Apple Watch-focused home workout program that guides you through various workouts, complementing the fitness-focused features in the Apple Watch. 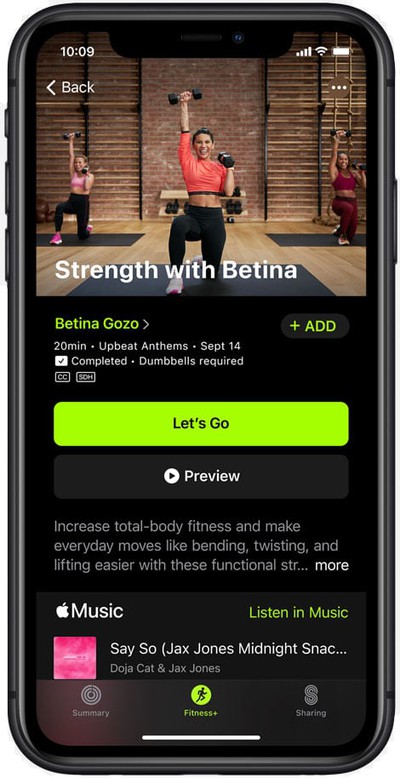 With Fitness+, Apple provides workout routines that can be watched, with the Apple Watch doing the necessary tracking to make sure you’re on target and meeting fitness goals.

Fitness+ content can be watched through the Fitness app on the iPhone, iPad, and Apple TV. On ‌iPhone‌, the Fitness app was formerly the Activity app, while it is a new available on the ‌Apple TV‌ and ‌iPad‌ with the launch of tvOS 14.3 and iPadOS 14.3. 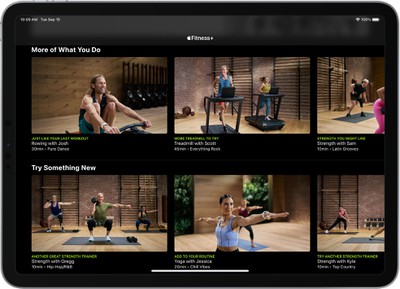 The Fitness+ routines are designed for you to follow along with for home workouts, with minimal equipment needed in most cases.

As you follow along with Fitness+ routines, the Apple Watch tracks your movement, workout length, calories burned, heart rate, and more, just like other workouts.

Workout stats are viewable on the Apple Watch, but information is also shown right on the ‌iPhone‌, ‌iPad‌, or ‌Apple TV‌ in real-time so you can keep a closer eye on how the workout is going and the calories you’re burning without having to look down at your wrist.

A small window in the upper right hand corner of the Fitness+ interface shows statistics synced from the Apple Watch.

When you hit milestones like closing an activity ring, an animation pops up on the screen to keep you motivated. You can also see comparisons with other people who have done the workout before as part of a “Burn Bar” to give you an added push, and you’ll see a countdown timer so you know just how long is left during a particularly tough interval. 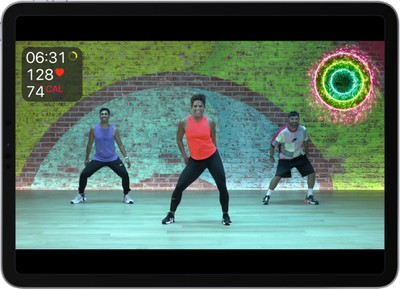 An Apple watch is required to use Apple Fitness+ on the ‌Apple TV‌ because of the Apple Watch on-screen integration. You can, however, do Fitness+ workouts on ‌iPhone‌ or ‌iPad‌ without an Apple Watch. 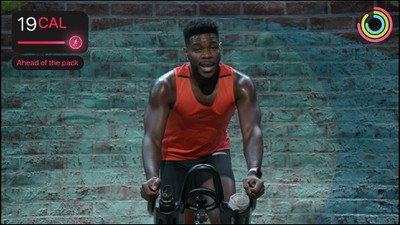 Fitness+ workouts can be initiated through the Fitness+ section in the Fitness app on the ‌iPhone‌, ‌iPad‌, and ‌Apple TV‌. Launching a workout through the Fitness+ app on one of the aforementioned devices also starts the correct workout in your Apple Watch Workout app, with workout metrics automatically sent in real-time to the screen you’re viewing the workout on.

Many people have wondered if Fitness+ supports two people working out at the same time, but it does not. Only one person’s Apple Watch can be synced to an ‌iPhone‌, ‌iPad‌, or ‌Apple TV‌ at a time.

Even though Fitness+ does not support dual workouts on the screen, the second person working out can still start the same workout on their Apple Watch and follow along, just without seeing their progress displayed on the screen. Another option is to use a second screen such as an ‌iPad‌ along with a TV.

Fitness+ With No Apple Watch

Fitness+ is designed to work with the Apple Watch, but workouts can be done on ‌iPhone‌ and ‌iPad‌ without a watch. There is no option to do workouts on ‌Apple TV‌ without a synced watch. 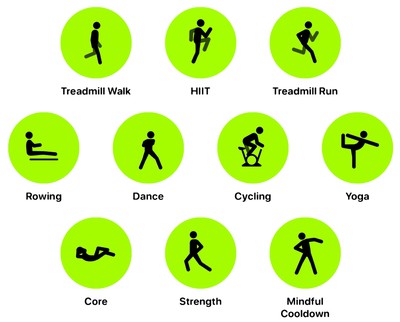 Many of the workout types require no specific equipment, but Rowing, Treadmill Walk, Treadmill Run, and Cycling can be used with any compatible exercise equipment. Some yoga workouts require a yoga mat and some strength training exercises require dumbbells.

The Fitness+ workouts are designed to be done from home, the park, a hotel, or anywhere else you happen to be, but you can also use them at the gym with the gym’s workout equipment and a connection to the Apple Watch.

Each Fitness+ video includes three different trainers on the screen at the same time, and at least one of these trainers will be doing a “modified” version of the workout that’s simpler or less taxing. In a cycling workout, for example, one trainer might pedal more slowly, or in a yoga workout, one of the trainers might do simpler poses. In many cases, the alternate trainers you see in workout videos will be the leads of other kinds of workouts.

Apple has also added a series of 10 to 20 minute videos for those who are new to workouts and not ready for the standard workouts. These videos have a single instructor and provide instructions on equipment setup or how to do a particular exercise.

If you’re new to working out, or just to home workouts, Apple has a program for beginners available, and Apple Fitness+ has been designed for people with all skill levels in mind. 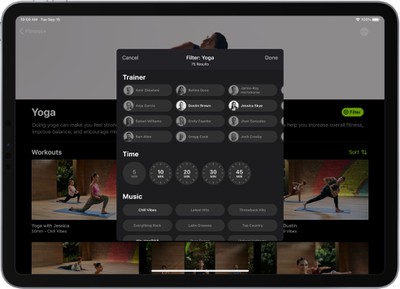 You can select the duration for your workout to match the amount of time that you have available. Workouts can be as short as five minutes or as long as 45 minutes.

Fitness+ videos are set to songs pulled from Apple Music, which can be listened to even by non-Apple Music subscribers. ‌Apple Music‌ subscribers, however, have the option to download Fitness+ playlists for use outside of the Fitness+ service.

When you finish a fitness routine you’ll see a summary screen with all of your workout metrics, including full workout time, average heart rate, active calories burned, total calories burned, and more.

Apple has a dedicated team of trainers that work to produce videos for Fitness+ and the company plans to add new workouts on a weekly basis so there’s always a fresh routine to do.

Apple Fitness+ is more than just a collection of workout videos. It offers up intelligent recommendations for videos you should try out based on the things you typically do with the Workout app on the Apple Watch. 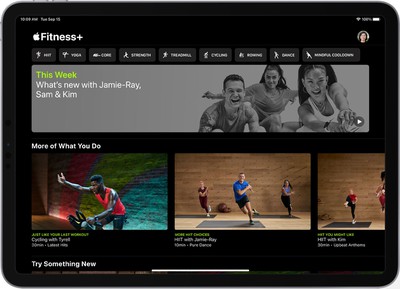 Fitness+ suggests workouts based on your interests, along with new trainers and workouts that can help you even out your routine. You’ll see these suggestions after you’ve completed three Fitness+ workouts.

Fitness+ will be available for $9.99 per month or $79.99 per year, which breaks down to $6.67 per month. For that price, up to six family members total can use the Fitness+ service.

Fitness+ is also included in the Apple One Premier bundle, which is priced at $29.99 per month and also offers ‌Apple Music‌, Apple TV+, Apple Arcade, Apple News+, and 2TB iCloud storage,

With the purchase of a new Apple Watch Series 3 or later, Apple is offering a free three-month trial of the Fitness+ service. All others can get a one month free trial, and those who purchased an Apple Watch from Best Buy also have separate extended trial options.

The Fitness+ app on ‌iPhone‌ and ‌iPad‌ does not appear to work with AirPlay 2-enabled smart TVs and devices for AirPlaying Fitness+ to television sets.

Fitness+ requires iOS 14.3, watchOS 7.2, iPadOS 14.3, and tvOS 14.3, which launched on the same day. The service automatically appears as a new tab in the Fitness app on ‌iPhone‌ and as a new app on tvOS. ‌iPad‌ users are able to download the Fitness app from the App Store.

Exercise for Stress and Anxiety

Are Fitness Activity Trackers & Watches Worth the Money?