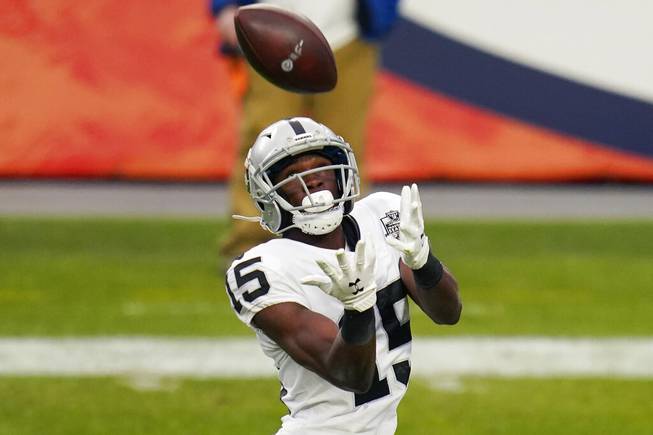 Las Vegas Raiders wide receiver Nelson Agholor (15) catches a pass against the Denver Broncos during the first half of an NFL football game,

Four weeks ago the Raiders thought they’d be getting ready for a postseason game right now. Instead, after a calamitous 1-3 finish to the season (including three straight home losses) they are preparing to enter the offseason, hopeful that a few expert tweaks will help the team break through to the playoffs in 2021.

There are some things we already know for sure about that 2021 team: Derek Carr will be the quarterback, Jon Gruden will be the coach and the offense will score points. And that certainty is comforting as a baseline. But there are questions as well.

Three key storylines as Las Vegas goes into the offseason:

More than any single move the team makes in the next eight months, the biggest impact will be made by the person they hire as defensive coordinator.

The team is in dire need of a defined vision on that side of the ball. Whether they decide to hire a 4-3 zone coverage type like current Falcons interim coach Raheem Morris or a 3-4 one-gap type like Wade Phillips, the Raiders need a definite blueprint for what kind of defensive system they want to run. And the hire has to be made in time for the new DC to have a say in free agency and the draft, because the next coordinator should have near-autonomy to build the defense as they envision.

Gruden is probably amenable to that arrangement. So between the freedom to run the defense, the collection of young talent on the roster and what should be a laser focus on adding defensive players in the draft, the Raiders’ coordinator job should be attractive to outside candidates.

And the bar is set very low. The Raiders finished at or near the bottom of the league in just about every major defensive category in 2020, so improvement merely has to be incremental — say, going from the 32nd-ranked defense to No. 22 — in order to get the team into the playoffs.

The Raiders signed Nelson Agholor late last offseason to add some depth and a veteran presence to the receiving corps, but by the end of the season the sixth-year veteran had worked his way into the No. 1 role, catching 48 passes for a career-high 896 yards and eight touchdowns. He also finished second in the league in yards per reception (18.6). It was a home-run signing.

Things won’t be so simple this offseason. Coming off a bad 2019 campaign in Philadelphia, the Raiders were able to land Agholor to a team-friendly 1-year, $1 million contract. There will be way more suitors this time around, meaning Agholor will be more expensive.

As mentioned, the team signed Agholor as an insurance policy in case the young receivers weren’t ready for prime time. And after watching Henry Ruggs and Bryan Edwards struggle to contribute as rookies, the Raiders can’t feel confident about the youngsters being ready for prime time next year, either.

Las Vegas has to be careful about an extension for Agholor, as consistency has not been his calling card at the pro level. But given the state of the team’s receivers, can the Raiders afford to let him leave?

The end for Trent?

The Raiders went into last offseason with a ton of cap space; they’ll have to be more frugal this year, as OverTheCap.com projects them to have just around $5 million in space. Unless they make some more room, perhaps by shedding one of their biggest contracts…

And it just so happens that one of the team’s highest-paid players — and the highest paid right tackle in the entire league — appears primed to be jettisoned. Trent Brown, who inked a massive 4-year, $66 million deal before the 2019 season, played in just five games this season, and while his absence may have hindered the team in the running game the offense appeared to get along just fine without him.

Las Vegas could save $14 million against the cap next year by cutting Brown. Frankly, it almost seems academic at this point, especially since some of that money could be put toward retaining Agholor and adding a veteran starter (or two) on defense.

During his Friday press conference, after announcing Brown would miss his 11th game of the season, Gruden said the team expects Brown to set the standard at his position and indicated he’ll be back next year.

“It’s disappointing, no doubt,” Gruden said. “It’s very disappointing. We brought him in here and paid him to be the Lebron James of right tackles, and he’s had a lot of adversity. He’s had injuries, a number of injures and it’s hurt our football team, no doubt, but that’s part of this business. And for the time being, we’ll play the next man up but hope to get Trent back and ready to roll for next season. He’s a great player. He is a great football player. He’s just got to get healthy and stay healthy.”

What to Watch on New Year’s Eve 2021: Jennifer Lopez, Kiss, Bieber and More

Around the world, many are having ‘the quietest’ New Year’s Eve in memory

Will Kim Kardashian And Kanye West’s Divorce Be Amicable? What Happens Next?